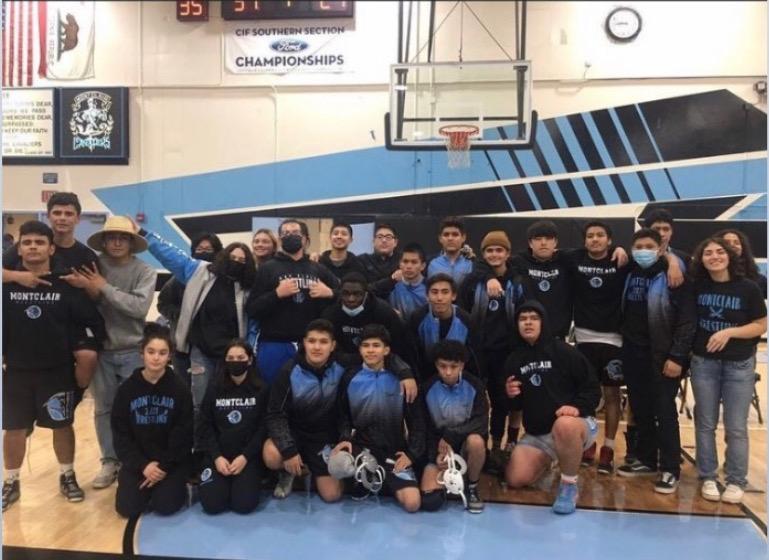 Within the sport of wrestling the toughest opponent that you will ever face is yourself. The challenges both physically and mentally are enough for someone to give up. However, the wrestlers here at MHS have coaches who help get them through even the toughest challenges. After a very eventful and challenging year, wrestling has finally entered into the postseason. The young wrestlers had a very challenging year. Some of those adversities were having a shortage in members and lack of experience. Despite those setbacks, the team finished strong with the help of their coaches and senior captain. The postseason is about setting goals and working towards being a better person on and off the mat. The guiding hand throughout the entire postseason is the coaches who help attain the goals you want.

“It starts with the small things,” says Senior Captain Sergio Quezada. Sergio began wrestling in 8th grade as a small hobby which then quickly became a sport where he wanted to become competitive. His goal throughout high school was to be a Masters qualifier. This meant a lot to him because there hasn’t been a Master’s qualifier since his freshman year.  Sergio had also suffered from an injury to his elbow during the Bob Bellot tournament hosted at MHS before the league finals tournament. He managed to recover fast enough but he still had to toughen up and fight through the pain. Eventually, it would pay off because he went on to qualify and wrestle in the CIF individuals tournament. Despite his courage, the injury had a serious effect on him causing him to find a different way to wrestle and adapt with the challenges he would face. “Thankfully I was able to actually achieve my goal and I managed to qualify for Masters my senior year.” He also mentioned that his coaches helped him through close matches by helping him stay focused and reminding him that he needs to stay strong and not let negative thoughts get in the way of his goals.

Sergio also stated how being a good leader was something that he found to be difficult seeing as he was one of the 2 seniors who would  lead the younger wrestlers into a big tournament or a dual match. “ It was hard to provide that morale for the younger guys because there were only a few of us who have been wrestling for at least 2-3 years.” he explained. However, the team didn’t have to just rely on their captains but they fell back on their coaches. Coach Diaz is the head coach for a number of sports and that includes wrestling. “The program here at MHS has been going on for 20 years and this helps connect 20 years worth of wrestlers that have wrestled at this school with the current group of kids,” says Diaz, “ it helps build a family with these kids and the returning guys help show new techniques and talk about what the program has done for them”.

The wrestling team had a tough season during Covid where they lost the majority of their members who would either graduate or leave the program. This season was meant to be a recovery from all the negativity they had to endure during the Covid season. The team as a whole took 2nd place in the Mt Baldy league. Despite that, it was a great accomplishment because it helped give experience to the younger wrestlers. Diaz mentioned that it was great to see the team make it to CIF, seeing them at tournaments, staying in hotels, and just being able to see the new guys wrestle in a different environment. Coach Diaz has high hopes for the team seeing as they have a lot to improve on. He wants the team to win a league title and he believes that they can. Coach Diaz along with assistant coaches Guerra and Furr help push them inside of the room. They tirelessly tell their wrestlers what they need to work on, to practice with intensity, and to have a strong mindset before a match. A common saying the coaches use is “However much you put into this sport is what you’ll get out of it” and during the postseason the wrestlers here at MHS will be working tirelessly to strive towards being league champions and individual champions next year. It may look like it is a individual sport when there are only 2 people on the mat but without teammates to support you and coaches to guide you, there wouldn’t be success in this sport.